Checkout Securely
Your Cart (0)
Your Account
Other Commonwealth Countries? Please note it is not possible to combine orders over our two sites.
To take advantage of combined or free postage please email using the subject "Free Postage" (Please check Spam if email does not arrive)
This only applies to orders that can be sent together.
NEW IN: MARCH New Issues
Click here for Australia and here for AAT March new issues

Great Britain first recognised the concept of issuing stamp booklets in 1878, when it was proposed to the then Postmaster General and accepted by Parliament.  Nothing was done with the idea however, until Luxembourg produced the first official booklet in 1895.  A private stamp booklet was produced in Great Britain in 1886.

The Commonwealth of Australia first issued booklets in 1904.  The idea for this was presented to the Postmaster General in 1903 by Mr Nixon of Rockhampton.  The idea was taken up by the Post Office and the Postmasters of each State were asked to forward to the Government printer in Adelaide current stamps of 1d and 2d values to be made up into booklets.  Each State was asked to provide sufficient quantities to make up 200 booklets of each denomination with a face value of £1 per booklet. 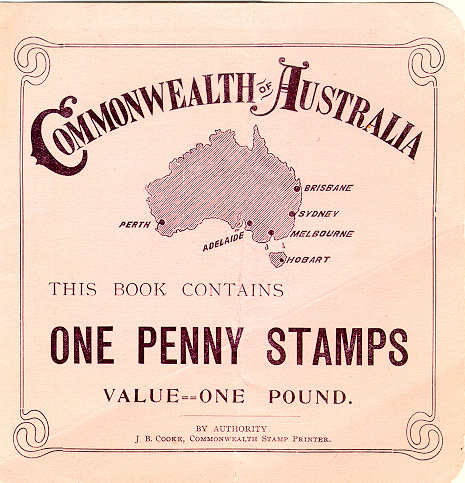 The completed booklets were sent back to each State to be issued to the public from 1st January 1904.  On the front of each booklet cover were the words “Commonwealth of Australia”.  These therefore became the first Commonwealth issues for sale to the public.

Dates of issue to the public varied by State.  In Queensland, Tasmania, South and Western Australia they were available on 1st January 1904; in Victoria from March 1904 and New South Wales from May 1904.

There were two £1 booklets issued: one containing 240 1d stamps; the other 120 2d stamps. Usually, in these booklets, a complete sheet of stamps was folded over into panes of thirty and stapled complete into the booklet cover.

Only a handful have Survived
Before Federation, New South Wales had experimented with a booklet containing twelve 1d stamps on sale at 1/0½d.  This did not find a ready market.  The early Commonwealth booklets also made a slow start.  In some States sales were so few that Post Offices took the stamps out of the booklet covers and sold them normally.  Most of the sales of complete booklets were to business houses who broke up the booklets in order to use the stamps.  Hence only a handful have survived to the present day.  Sales of the booklet containing 120 2d stamps were very poor and these were discontinued in 1909.

New 2/- booklets were issued in 1910 and 1911 again containing States stamps.  The 1910 booklet contained eleven ½d stamps and eighteen 1d stamps and was sold for 2/-.  The 1911 booklet was generally similar to the earlier one but with an additional ½d stamp.  Some examples of the later booklet can be found with the ½d stamp stuck back into the pane prepared for the earlier booklet by means of small pieces of gummed paper attached to the back.

Preparation of booklets from sheets was both time consuming and wasteful and they were inconvenient to use.  So, in 1928 a special booklet plate was produced.  This plate was designed so that a sheet of 120 stamps could be broken up into small panes, each of which had selvedge at left for stapling.  This enabled the stamps to be upright in single panes in the booklet.  The stamps in the right hand half of the pane were printed inverted so half of these booklet stamps have inverted watermark.  Each sheet from this type of plate contained twenty têté-bèche pairs.  These were normally separated in the process of making the booklets.  Only one such pair survives in private hands.

The 3d Airmail stamp of 1929 was issued in booklets in 1930.  The stamps used for this booklet came from a specially prepared plate of 64 stamps arranged in horizontal pairs to allow margins for stapling.  Guide dots were printed between each stamp in the horizontal rows.  These dots can sometimes be used to identify single stamps coming from this plate when the guide dot has not been removed by the perforations.

A second commemorative stamp was planned to be issued in booklet form.  This was the 3½d value of the Olympic Games set of 1956.  Due to a last minute change in the postage rate to 4d the 3½d stamps were scrapped and the plans for a booklet were never fulfilled.

Variations of Design and Colour

A second type of booklet plate was used from 1949.  The new booklet sheet comprised six horizontal panels of 48 stamps, each in three rows of sixteen with horizontal gutters between the panels.  Each panel was cut vertically into panes of six stamps each of which has a binding margin at the top.  In this type of booklet the stamps are bound horizontally in respect to the cover.  This type of plate was used until 1972.

In 1951 the 3d scarlet King George VI stamp was printed for use in booklets.  However, postal rates were increased and the booklet was never prepared.  Sheets of 144 were placed on sale from post offices.

The sheets of stamps for the first four booklets prepared from the second type of booklet plate were fully perforated.  Sheets of stamps, interleaves and covers were bound together and then guillotined into individual booklets. This led to untidy results due to the guillotine missing the perforations, so from 1957 booklet sheets were partly imperforate.  Finished booklet panes from later booklets are imperforate on three sides.

Commercial advertising in Australian stamp booklets commenced in 1960 with changes in the advertising material being made every few months. An edition reference number was printed on the cover in order to differentiate between different advertising content. After edition 2 of 1961 different series of booklets were issued in different States and a series letters as well as edition numbers was introduced.  Booklets issued in New South Wales have N, Victoria used V and general booklets for all other States carry G series letters.  From 1966 a prefix of D was sometimes used with the series and edition reference.

Special booklets were made up from ordinary sheet stamps for use by the Australian Defence Forces in Vietnam in 1967.  These contained the 5c Thornbill stamp.  In 1968 the 5c Queen Elizabeth blue definitive from ordinary sheets was also used for this purpose.

tralian Post Office announced the cessation of stamp booklet production in 1973 and, as an alternative, provided a plastic stamp wallet to hold loose stamps.  However this decision was not final and in 1979 tests of stamp folder vending machines commenced.  Further tests followed in 1982 and sales of machine vended folders commenced later that year.  From 1988 Australia Post re-introduced stamp booklets for sale over the Post Office counter.  Booklets and folders containing commemorative or definitive stamps continue to be issued regularly.

Part of the fascination of collecting Australian booklets and booklet stamps comes from the fact that different plates were used from those of the normal sheet stamps. Varieties appearing on the booklet sheets are therefore different from those appearing on the sheets and are often more prominent and more profuse.  Modern booklets and folders are frequently the only source of a particular issue.  No serious collection of Australian stamps and postal stationery can overlook this important aspect.

Australian Booklets from 1949 to date including new issues

Specialist Australian Booklets including booklets mentioned in this article